Nick Cannon admits and he and wife Mariah Carey posed for some intimate nude shots ahead of their twins’ birth. Where are these photo now? 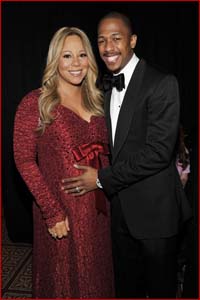 Mariah Carey and husband Nick Cannon are singlehandedly turning pregnant belly shots into a new form of celebrity expression. Carey first posted a photo of her belly adorned with a painted on butterfly, but now Cannon is getting in on it too.

Cannon, 30, and Carey, 42, posed for several intimate shots in the nude — and the photos are now posted in the couple’s Los Angeles home.

The “ick” factor isn’t lost on Cannon — he recently said on his Rollin’ With Nick Cannon radio show that he knows his twins will have questions about naked photos of his parents.

“My children are going to have to see these pictures… It’s a little weird,” Cannon said. “When they get older and their friends come over… they will see the pictures and say, ‘Your daddy’s butt naked!'”

Yeah. We’re all for pregnancy expression — but it might be time to take down the pics when the kids are old enough to bring friends over.

“It’s a little nasty,” he continued. “I mean, have you ever seen your parents naked?”

It sounds like Carey was the one who wanted the pics — we all know who wears the pants in that relationship.

“I don’t want my naked booty out there for everyone to see!”