Britney Spears’ two kids Jayden and Sean will soon have a half sister to play with! Kevin Federline and his girlfriend Victoria Prince are expecting a daughter to be named Jordan. 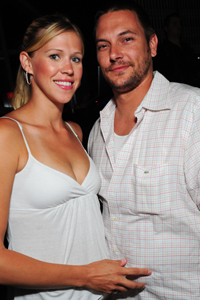 Britney Spears’ ex-husband Kevin Federline has announced that he and girlfriend Victoria Prince are expecting a daughter this year — and they already have a name picked out!

“Victoria said that if we were going to have a little girl, she wanted to name her Jordan,” he told Us magazine. “And then, we actually thought that it was a boy, but we stuck with the name Jordan because, you know, it fits both ways. We just found out the other day that we’re having a girl. So it worked out!”

Jordan is a unisex baby name meaning “to flow down.” The name Jordan is more popular for boys than girls, as it was ranked number 49 on the Social Security Administration’s list of most popular baby names for 2009 (the 2010 list has not been released), however, it was not ranked in the top 100 for girls.

This is Federline’s first child with Prince, but will be his fifth child overall. Fertile Federline has two children with Britney Spears (Sean Preston, 5, and Jayden James, 4) and two children with ex-girlfriend Shar Jackson (Kori, 8, and Kaleb, 6). His new arrival will be baby number five.

No word how Britney feels about the new arrival, but Federline said that Sean and Jayden are “super excited” to be big brothers. Britney and Federline were married for three years before divorcing in 2007, right on the heels of her well-publicized breakdown. Despite the fact that Britney seems to be doing much better, Federline continues to have sole custody of Sean and Jayden.