Angelina Jolie debuted a new arm tattoo while meeting with refugees in Libya on Tuesday. Find out all the details on her fresh ink — and why it is sparking baby rumors.

Angelina Jolie caused quite a stir when she met with refugees in Libya today. The UN Goodwill Ambassador and Oscar-winning actress wore a sleeveless black top to show off her new tattoo on her left arm.

The actress has had five tattoos with the coordinates of the birthplaces of her and Brad Pitt’s six children on her left arm. This new tattoo makes the sixth coordinate tattoo on her arm, and one source says the location may be Algeria. Does this mean a new baby from Algeria will be joining the Pitt and Jolie household? 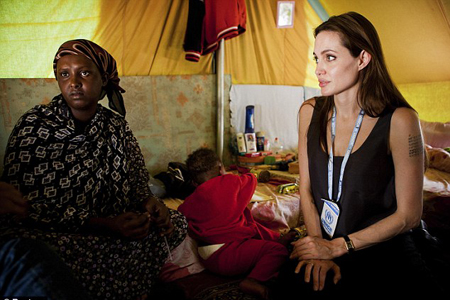 Jolie’s most recent red carpet appearance in December showed her sporting five coordinate tattoos on her left arm, including the birthplaces of nine-year-old Maddox from Cambodia, seven-year-old Pax from Vietnam, six-year-old Zahara from Ethiopia, four-year-old Shiloh from Namibia and two-year-old twins Vivienne and Knox born in France.

So what could this sixth line of coordinates mean? Could Angelina and Brad Pitt have already adopted another child? She certainly doesn’t look pregnant so another pregnancy right now doesn’t seem likely.

The 36-year-old actress told Larry King in August that she and Pitt are “always open” to another child, but said that they had “no plans at the moment.”

Tell us: What do you think the new coordinate tattoo means?