Monday night’s Dancing With the Stars was a tough one for partners Maksim Chmerkovskiy and Kirstie Alley. The couple suffered their first fall of the season, but it wasn’t due to a flub — Maks’ thigh was truly hurt.

Maksim Chmerkovskiy and Kirstie Alley have been blowing the judges away on Dancing With the Stars this season, but a single drop to the floor left fans holding their breath on Monday night’s episode. 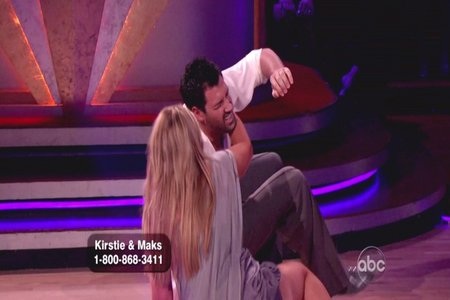 Maksim Chmerkovskiy and Kirstie Alley had just started their routine, which included gracefully dragging Alley across the floor, but something went terribly wrong. The pro’s thighs seemed to give out and he dropped his partner.

Chmerkovskiy and Alley managed to shake it off and finish with high praise from the judges. So, what did the dancing duo have to say about Maks’ injury?

“No big deal,” Chmerkovskiy told UsMagazine.com after the show. “I’ll be fine… It’ll take a stretcher to get me out of here! I’ll be okay.”

Maks Chmerkovskiy isn’t about to let a little injury stop his run for the Dancing With the Stars mirror ball trophy! “You know how I learned to swim? I was on a swimming team — you know how they taught me to swim? They threw me in the water and said, ‘There you go!'”

Kirstie Alley was more focused on her partner’s injury than being embarrassed. “I was so scared. I knew something was wrong. But then he got up and he was fine, and I thought, ‘So what?'”

Alley knew taking on the Dancing With the Stars ballroom floor could mean a few mishaps. “When I signed up for this I signed up for live TV, whatever the hell that means,” Alley said. “For me, this is a story. I dance, I get an 8, is that a story? No. I’m not saying I don’t care about our scores, I do, but I don’t give a (expletive) if we fall down!”

There is still no word on the extent of Maks Chmerkovskiy’s injury but we can assure these two will not be missing a performance. Did you see Maks Chmerkovskiy and Kirstie Alley’s tumble to the floor?