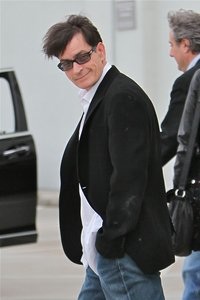 Charlie Sheen’s My Violent Torpedo of Truth tour garnered mixed reviews in the form of boos in Detroit and a standing ovation in Chicago, but the star took it all in stride as he mocked his recent behavior in a seven-minute video displayed for fans who showed up to his tour.

Everyone remembers Charlie Sheen’s famous 20/20 interview, right? The former Two and a Half Men star rambled about tiger blood and coined so many new catchphrases he could have made his own dictionary. Well, word has it the star played a seven-minute video mocking the interview and it also showed up on YouTube.

In the video, new footage of Sheen is spliced in with the old ABC interview. Sheen makes a mockery of the “winning” catchphrase he spat out during the original 20/20 interview and chain smokes even more than in the first. Cleverly “willed” shirts with his coined sayings and ramblings appear randomly on the actor’s body as he talks in Sheen-tongue.

The video eventually moves into a music video format and ends with a clip from Scarface. Be warned, the video is uncensored so you might need to keep a pair of earmuffs handy if you’re sensitive to profanity.