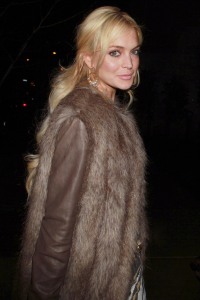 Lindsay Lohan has been vilified by the media for a long time now. It seems only natural that she would want to play one on the big screen.

According to Radar Online, La Lohan (oh, I guess we can’t call her that anymore since she’s reportedly dropping the Lohan from her name) will be auditioning for the villain role in the new Superman film.

“Lindsay plans to return from New York on Wednesday and meet with producers and read with an actor who is up for the role of Lex Luther,” pal Nathan Forks told the site. “Lindsay said she would be ecstatic to be part of the Superman movie… it’s a dream of hers.”

If she’s cast, she’ll be joining the likes of Henry Cavill who’ll play the Man of Steel (I just got to chat with him at WonderCon this weekend and wow, that is some perfect casting), Amy Adams as reporter Lois Lane and Diane Lane and Kevin Costner as Clark Kent’s parents. Well, if she’s on the set, expect a daily article about the film.