Phoenix Suns fans were shocked when Steve Nash filed for divorce from his wife of five years just one day after she had a baby. If new rumors are true, the basketball superstar found out that the baby was not his — but former Suns teammate Jason Richardson. 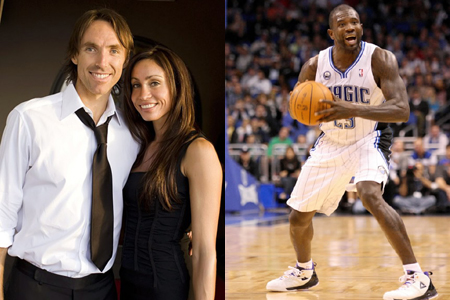 Phoenix Suns basketball star Steve Nash has been frequently seen with his wife and two children, so fans were surprised when he filed for divorce from his wife Alejandra Amarilla one day after she had their third baby.

Reports are now surfacing that he had suspected his wife of five years to be cheating on him — and had even separated from her a few months before the baby was born. His cheating suspicions were reportedly confirmed when the baby was born.

Many sources, including the Jersey Chaser, report that the father is former teammate Jason Richardson (pictured above, right).

In fact, they are saying this is why Richardson was quickly traded to the Orlando Magic in December — right around the time when the baby was born!

Neither Nash nor his ex-wife Alejandra have made any statements confirming or denying these reports, so it is hard to separate fact from fiction at this point.

Many people are calling the rumors false after Alejandra did an interview with Arizona Foothills (check out the interview and pictures here) and posed for pictures with her new baby, along with the couple’s twin daughters. In fact, Terez Owens is reporting that it is Nash himself who was cheating with a 22-year-old girl — not his ex-wife!

In the interview, Alejandra spoke of her marriage with Nash: “It has its ups and downs like every other marriage. Its challenges can be somewhat more demanding. But we have three wonderful children and I am grateful for the life I shared with him. I wish him the best.”

Steve Nash joined Lakers to be a good dad >>