Will Smith and his son Jaden Smith are teaming up again to star in a new M. Night Shyamalan movie. Is the father-son duo a good choice for this new sci-fi movie? 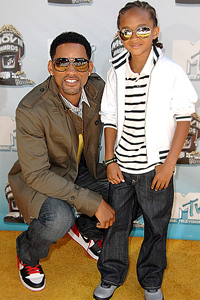 Will Smith and his 12-year-old son Jaden Smith proved they can make magic on-screen together, appearing in 2006’s The Pursuit of Happyness. Since then, Jaden has refined his acting chops even more by starring in the hit movie The Karate Kid. Their next project will be starring in a new M. Night Shyamalan movie, a science-fiction film temporarily titled One Thousand A.E.

Set 1,000 years in the future, Jaden plays a boy who is trying to survive on an abandoned planet after his spaceship crashed, while Will portrays his father.

“The chance to make a scary, science-fiction film starring Jaden and Will is my dream project,” said Shyamalan, who also directed The Sixth Sense and The Happening.

Will is also producing the movie, along with his wife Jada Pinkett Smith, James Lassiter, Ken Stovitz and Shyamalan. It was rumored that Will was developing the movie for his son Jaden, before deciding to star in it as well.

“Night is an outstanding filmmaker who has a tremendous vision for this science-fiction adventure story and we couldn’t be more excited to be working again with Jaden after our experiences on The Pursuit of Happyness and The Karate Kid,” said Doug Belgrad, president of Columbia Pictures. “We’re thrilled to have the two of them together on this project.”

Read on for More on the smith family