Reese Witherspoon and Hollywood agent Jim Toth tied the knot on March 26 and the official photos have landed. The Water for Elephants star went pretty in pink in Monique Lhuillier for her second marriage and then switched to the more traditional white for the party. Pics of the platinum, pave diamond wedding band are also circulating! 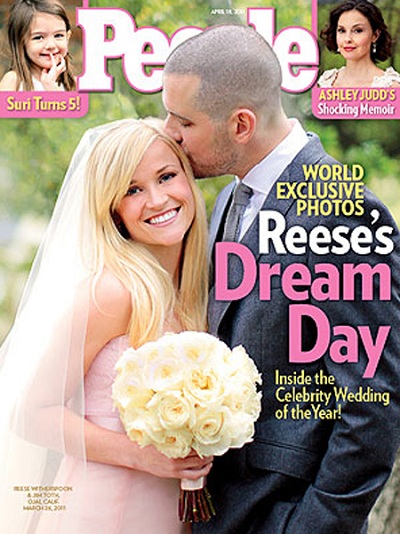 Reese Witherspoon, 35, and CAA agent Jim Toth, 40, got engaged back in December and last week, Witherspoon finally got to put on her new platinum and pave diamond wedding band. There were several paparazzi helicopters circling the A-list affair hoping to snap shots, so it’s no surprise the official Witherspoon-Toth wedding photos are making headlines.

Also no surprise, everyone’s talking about their wedding rings, designed by William Goldberg!

While Witherspoon’s second wedding has been making news since the engagement, word was the low profile couple wouldn’t release wedding shots, but here they come! People has the first photo exclusive, but Hello features a bridal shot on their cover and Us Weekly has a wedding shot issue coming Wednesday.

As seen on People‘s April 4 cover (above), the bride didn’t wear white or go for a traditional up-do for her second wedding. Witherspoon instead let her Legally Blonde tresses flow free and opted for a pale pink gown paired with Jimmy Choo’s Macy satin platform sandal.

Witherspoon’s custom-designed, strapless Monique Lhuillier gown featured a Chantilly lace corset top separated from a tulle A-line skirt with a silk satin ribbon, according to the mag. “She took your breath away,” a guest told People.

After the short A-list wedding ceremony, complete with the release of 80 white doves, the new Mrs. Toth made a quick costume change. She returned for the sit-down dinner, dancing and s’mores in a white Lhuillier mini-dress.

A total of 140 guests made it out for the event, including Scarlett Johansson and Sean Penn, Matthew McConaughey, Kate Hudson, Gwyneth Paltrow, Robert Downey Jr. and other celebs from Toth’s client roster and Witherspoon’s past projects.

In spite of the uber-Hollywood guest list, the affair at Witherspoon’s 1920s Ojai ranch managed to pull off “a real family feel” with “so much joy in the room and a lot of laughter,” guests told People. Word is the romantic decorations blended her Southern roots with “timeless California architecture, rustic materials and beautiful gardens.”

While the photos have already landed, the honeymoon isn’t happening quite yet. With Water for Elephants hitting theaters April 22, 2011, Witherspoon immediately got back to promoting the upcoming drama with costar Robert Pattinson. The newlyweds and Pattinson were kept busy with activities like press junkets and Sunday’s Academy of Country Music Awards.

And stay with SheKnows for our exclusive interview with Reese in the coming weeks!