Charlie Sheen made his second stop on the My Violent Torpedo of Truth tour Sunday night in Chicago. Amazingly, he wasn’t booed off the stage this time.

Charlie Sheen’s My Violent Torpedo of Truth tour touched down in Chicago on Sunday night – less than 24 hours after he was booed off stage in Detroit. This time, the crowd was a bit more favorable. 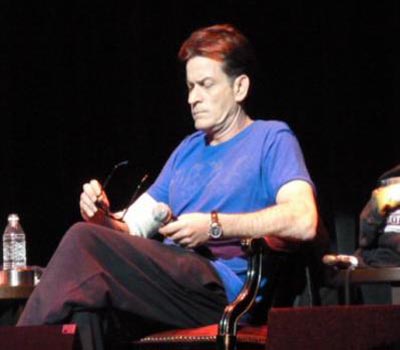 “Detroit sucks!” the Chicago crowd cheered when Sheen took the stage. He nixed the opening act for Chicago – a good thing after the poor comedian was booed mercilessly in Detroit.

“I wrote you a letter,” Sheen told the audience. “Dear f—— awesome Chicago…” He then went on to talk about the “disturbing odyssey” of his Detroit appearance.

Sheen revamped the format of his Sunday night show after the disaster on Saturday. The Chicago performance featured a Q&A format with Sheen answering questions asked by Live Nation tour promoter Joey Scoleri.

He was a bit more humbled during this performance – and even said he’d return to Two and a Half Men if asked.

Still no love for Chuck Lorre and other CBS execs, though.

“They didn’t give a f–k that I was hammered for eight years. Money, ratings, money, ratings.”

Sheen later told E! News that he considered going home after the first night. However, he changed his mind after he started writing down ideas.

“Yeah, we talked about it on the bus coming back, tons of input, then when I got back to the hotel and I wrote, we started writing, just to get some thoughts out, some feelings out, just some stuff that would be interesting, just stories, you know, themes, whatever, just bullet points,” said Sheen.

“I was up till about 5, 6:30 [in the morning], kept working on it, came here at 8:30, sat on the stage, looked out, came up with just the chair idea and we started talking about it…the interview thing. And then I went back and took a two-hour nap and came here and did it. Yeah, so there was a moment on the bus when it was like, we can just keep going, we can drive home,” he continued.

Here’s a thought – and we might be crazy for suggesting this – but why didn’t he write and plan things out before the tour started? Crazy, we know.

The Warlock rolls on, though – next stop on My Violent Torpedo of Truth is Tuesday in Cleveland. Will he keep it the same – or completely switch it up again? It’s anyone’s guess at this point.