Katie Couric is leaving CBS Evening News. So where is she going next? 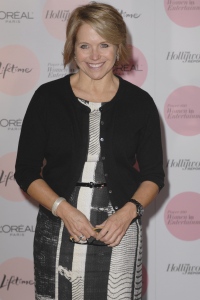 Less than five years ago, former Today show co-host Katie Couric became the first woman to anchor a network evening news broadcast. Now, she’s leaving CBS Evening News. AP is reporting that a network executive (who spoke under the condition of anonymity) said that Couric would be going as soon as her contract is up.

Couric’s move to primetime was highly anticipated, but the ratings just weren’t there. Of course, all network news shows have been in decline, while morning shows like the one she left have been holding strong. CBS Evening News slipped in the ratings, settling into third place behind Nightly News hosted by Brian Williams on NBC and World News with Diane Sawyer on ABC. Ratings aside, CBS Evening News won the Edward R. Murrow Award as best newscast in 2008 and 2009.

Katie’s contract with CBS expires on June 4, and she’s widely expected to start hosting a syndicated talk show starting in 2012. With the departure of Oprah’s long-running show, the market is wide open. Couric has offers in from all the major networks. She may even continue with a syndicated show on CBS. She also works tirelessly on the fight to prevent and treat colon cancer. (Couric’s husband Jay died of colorectal cancer in 1998.) Wherever she ends up, we wish her the best. Couric has the personality, the drive and clearly needs no sleep. I really want to know what kind of coffee she drinks.