Britney Spears took a break from her hectic schedule to take in a performance of The Lion King with her two favorite boys. What did Jayden James have to say about the performance?

Britney Spears was all over the place last week promoting the release of Femme Fatale — but this weekend she took some time out for R&R. Spears took her two sons, Sean Preston, 5, and Jayden James, 4, to catch the Sunday afternoon performance of Disney’s The Lion King at Mandalay Bay in Las Vegas. 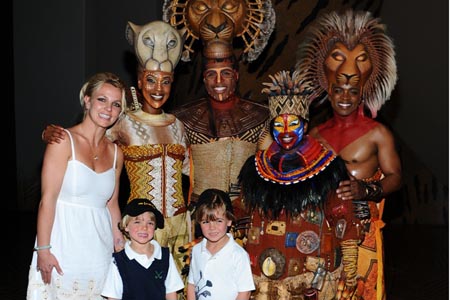 Little Jayden was a bit confused when he saw Williams.

“Hey, I saw you dead!” Jayden told Williams, referring to his role as Mufasa.

Spears was reportedly very gracious to the cast — and thanked them all for a wonderful performance.

Let’s say it together now: Awwwww!

In other Brit Brit news, she talked to MTV News about the upcoming video for Till The World Ends. The video — shot in an L.A. basement — features a grimier Spears dressed in a a studded black leather jacket and a sexy black bodysuit.

“[I watched it] just to make sure it’s right and that the costume looks right and the dancers are together and we all look in unison,” she said. “It’s an energy and it looks fresh. It has a certain vibe with it and it makes sense.”

But the grimy feel got to her after awhile.

“The set was a little much. It was grimy and gross and it felt like there was poop everywhere when there wasn’t,” she remembered. “It was sweat and it was disgusting sometimes … [I] tough it out.”