Will Charlie Sheen make it to Chicago? That’s the question everyone is asking after Sheen’s My Violent Torpedo of Truth tour kicked off in Detroit last night. It was not winning. Not by a long shot. 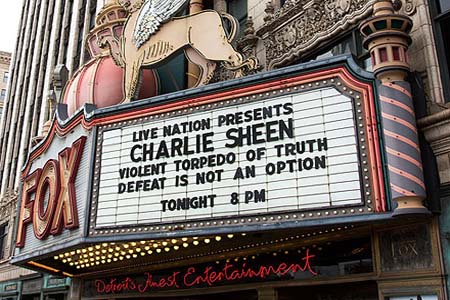 The audience set the mood early on when they booed the opening act. Sheen had to come out to save the performer from the audience, but the main act didn’t fare much better.

“Is anybody as confused by this (expletive) as I am? The good news is, I wrote every (expletive) word,” Sheen said in the midst of one of his rants.

The self-proclaimed warlock took the stage with two Detroit-based “goddesses” who sang the National Anthem and made out, much to Sheen’s appreciation. He even let them burn some of his famous bowling shirts from Two and a Half Men.

The performance was a mixture of Sheen’s “wisdom” and clips from movies such as Apocalypse Now, Jaws and Fast Times at Ridgemont High, among others.

He also took the opportunity to make fun of his audience.

“I figured Detroit was a good place to tell some crack stories,” he said. “Show of hands: Who here has tried crack? Forget that. Who is holding crack right now? I don’t do crack anymore, but I’m just saying.”

“Tell the guy next to you booing to shut the (expletive) up because he’s ruining it for the rest of you,” Sheen said.

And in the ultimate diss, one man yelled, “You suck!” at Sheen.

The boos got so bad that Sheen called for a music break and never returned.

Now, some Detroiters are asking for refunds and scratching their heads at what they just witnessed. We have to ask: What in the world were they expecting? The writing was on the wall with this one.

Will Charlie Sheen make it to Chicago tonight? Will he bomb again? Stay tuned.