Elizabeth Hurley has filed for divorce from her husband of four years, Arun Nayar. 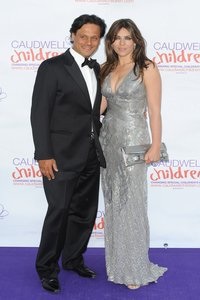 Elizabeth Hurley is making her separation from husband Arun Nayar official. According to the Daily Mail, the actress filed official divorce papers in London citing “unreasonable behavior” as the catalyst for the split.

Hurley’s latest Twitter posting showed signs that she’s doing just fine in the midst of filing for divorce. “Lying on the sofa with my son, eating strawberry sorbet,” she tweeted. “Me reading a nasty thriller and him a vampire book. Bliss.”

Elizabeth Hurley’s decision to file for divorce comes four months after the 45-year-old’s announcement via Twitter that she and Arun Nayar were separated. The couple had been married for four years.

At the time of the separation, Hurley became the victim of British tabloids who accused her of having an affair with cricket player Shane Warne. She defended herself, saying she was already separated from her husband. She’s since been seen out and about with Warne who is also in the midst of a divorce.

Elizabeth Hurley’s marriage to Arun Nayar was her first. She has an eight-year-old son named Damian with Steve Bing. Hurley’s most famous relationship was her 13-year romance with film hottie Hugh Grant.

Our best goes out to Elizabeth Hurley and Arun Nayar as they navigate the next stages of their lives.