Judge Judy is recovering after a health scare took her off the bench for a couple of days.

Television’s favorite judge of deadbeat character and deceit, Judge Judy Sheindlin, is once again full of pee pee and vinegar after a health scare took her off the bench earlier this week. 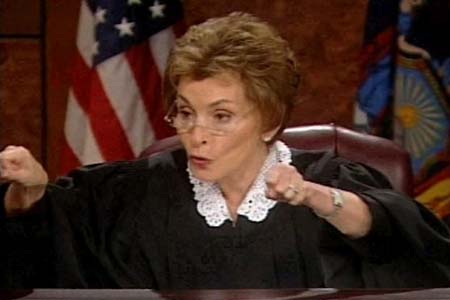 Judge Judy stopped taping of her court show on Wednesday after feeling exhaustion and intestinal discomfort that was so bad an ambulance was called for her. But never fear! All is well for our favorite curmudgeonly judge-of-character.

On Wednesday, she personally called TMZ founder and fellow lawman Harvey Levin to say, “I’m really fine. I wanted to go back to work this afternoon. I’m exhausted. I’m just tired. A lot of things just zoned together, including the bad news of the world. At my age, I know my body. My body is fine.”

It appears she was right. After some further testing at Cedars-Sinai, including an MRI, Judge Judy was on her merry way.

“I am on my way home. All is well,” Sheindlin told TV’s Entertainment Tonight. “Thank you all for your loving messages. See you in court. Be on time.”

Don’t pee on her leg and tell her it’s raining — girlfriend just wants to go home.