New Jersey’s Rutgers University is getting a lot of flak for booking pint-sized Jersey Shore star Snooki for an appearance this week.

The controversy centers on her fee. Rutgers paid $32K to bring Snooki in to talk, but they’re paying only $30,000 for renowned author Toni Morrison as a graduation speaker. 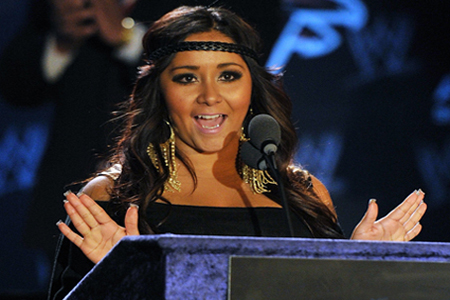 “Everyone wants to see Snooki!” the Rutgers University Programming Association (RUPA) tweeted before the event.

“The show was promoted as a comedy act, not an academic program,” a Rutgers University spokesman said in a statement. “As with any comedy show, the value of the content is subjective, and students choose to attend based on their interests.”

We’re a little shocked that Rutgers would spend student fees on someone who was thrown in the Seaside Heights, New Jersey, drunk tank last summer. We’d rather see the money go toward upping GPAs than learning about GTL.

Snooks isn’t the only reality celeb to rake in the personal appearance cash, however:

Kim Kardashian — along with sisters Khloe and Kourtney — command as high as $50,000 for appearances at nightclubs and other opening events, according to Investopedia.

The Dancing With the Stars finalist nets anywhere from $15,000 to $30,000 for speaking engagements at pro-life and abstinence events.

One of Snooki’s Jersey Shore housemates, DJ Pauly D, commands a hefty paycheck — in the neighborhood of $50K — for spinning gigs, and it’s going up all the time.

Almost makes us want to audition for a reality show. Almost.

Do you think Snooki deserves $32,000 for speaking to Rutgers students?