James Franco made his first public appearance after his Oscar catastrophe with the one person in the world who could really, truly understand: Fellow awful Oscar host David Letterman. 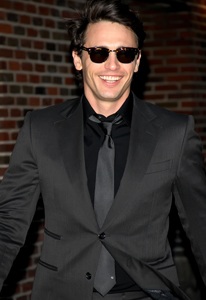 James Franco went on the Late Show with David Letterman to break his silence on one subject they could both understand: Bombing as an Oscar host.

Franco, who has done little to endear himself to the public or his fellow industry peeps since the fiasco, first tried to pass the blame off on his co-host Anne Hathaway, saying she’s just too darned perky!

“I love her, but Anne Hathaway is so energetic, I think the Tasmanian Devil would look stoned standing next to Anne Hathaway,” he said.

“I honestly played those lines as well as I could.”

Not only is it someone else’s fault, but he says we’re all hypocrites for caring in the first place.

“But here’s the hypocritical thing,” he said. “Leading up to the Oscars, I couldn’t hear enough about how, ‘Oh, people don’t care about the Oscars anymore. It’s dead. It’s boring. It’s at the end of a long awards season. Who cares about it?’ Well, as soon as you don’t host the way they want you to, they suddenly care, and they won’t shut up about it. Then they can’t hear enough about a show they don’t care about.”

Letterman, whose own hosting gig at the 1995 Academy Awards fell flat, told Franco what to expect from the coming months. “There will be for you, I think, a modicum of embarrassment, which you shouldn’t feel,” Letterman said. “That will pass. You’ll go into a period of numbness, and then you’ll become, rightly so, defiant.”