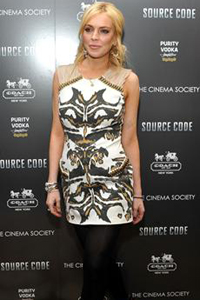 Lindsay Lohan stepped out on the red carpet for the first time since leaving the Betty Ford clinic when she attended the New York City premiere of Source Code.

Arriving in a fur coat, she took it off to reveal a black, white and gold printed dress, paired with black tights and black heels. She looked great, with her hair worn loose and long to set off her long, eye-catching earrings.

Lohan didn’t chat with the press, but did smile and pose for the photographers, along with Source Code stars Jake Gyllenhaal and Michelle Monaghan.

Earlier that day, Lohan took to Twitter to defend photos of her falling down to the ground outside of New York’s Motor City Bar.

“Is it not allowed to slip and fall? I’m always a klutz!” she tweeted.

She went on to tell TMZ that her fall was innocent, saying, “I was not drinking, nor do I drink! I was with my brother, sister and friends. I was making a joke. They’re trying to make something out of nothing. Just because I’m out doesn’t mean I’m drinking.”

Tell us: What do you think of Lindsay Lohan’s red carpet look?