Two and a Half Men creator Chuck Lorre has once again used one of his show’s vanity cards to speak his mind. Was it in regards to his war of words with Charlie Sheen? You decide. 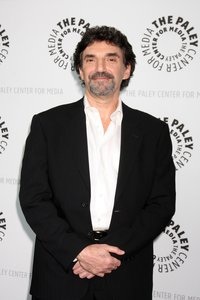 Two and a Half Men creator Chuck Lorre and Charlie Sheen began the greatest rivalry in television history — okay, that’s just one opinion — and it looks like the situation has taken a toll on Sheen’s former boss. Lorre took a moment to get a few things off his chest on a vanity card that appeared at the end of his show The Big Bang Theory on March 31.

Lorre doesn’t mention Charlie Sheen’s name, but it’s clear he’s got a lot on his mind.

“Whenever I’ve gone through tough times, well-meaning people have told me that God-the universe does not give us more than we can handle,” Chuck Lorre wrote. “Well, I’ve been going through a tough time recently, and sure enough, that old saying has been tossed my way on several morose occasions. After some careful consideration, I’ve decided it’s (expletive).”

For those of you who don’t know, and let’s face it, there’s no one who doesn’t, Sheen was fired from Two and a Half Men after he embarked on a media blitz, speaking his mind about his former boss.

Chuck Lorre’s vanity card continued, “Another thing I hear a lot is, ‘this too shall pass.’ Again, I know these are words meant to reassure, but somehow they always leave me feeling that heartbreak, rage and grief are going to come shooting out of me like kidney stones through an inflamed urethra.”

“For someone in crisis, I think a more accurate and helpful assessment of reality would be, ‘Love, sex, food, friendship, art, play, beauty and the simple pleasure of a cup of tea are all well and good, but never forget that God/the universe is determined to kill you by whatever means necessary.’ Consider trying that next time you’re called on to do some consoling.”

The Big Bang Theory vanity card concluded, “According to the rules of comedy, your suffering will be funny after an undetermined length of time. Maybe not while you’re having your gangrenous leg sawed off, watching your home burn down or learning how to be intimate with your cellmate, but, in the big scheme of things, soon.”

In the past, Chuck Lorre has used one of his show’s vanity cards to speak his mind. On the February 28 episode of Mike & Molly, Lorre addressed comments Sheen made about him in the media.

What do you think of Chuck Lorre’s latest vanity card?