Britney Spears is looking for a new travel partner after Enrique Iglesias pulled out of her tour earlier this week. Is Usher on the short list?

Our elation turned to sadness when Enrique Iglesias pulled out of Britney Spears’ tour just minutes after the announcement. Iglesias apologized to his fans for the confusion through a tweet. 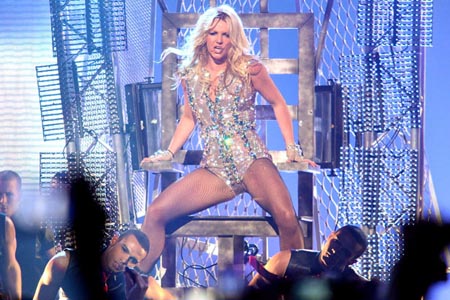 “Hey guys, sorry for the confusion regarding a possible tour in the summer with Britney Spears. We are on the Euphoria tour and will continue to do so including some soon-to-be-announced dates in U.S. So hope to see all of you soon,” Iglesias wrote Wednesday night.

His reps claimed he pulled the plug due for business reasons. “Enrique didn’t need to do a tour with Britney, as he’s already on a sold-out tour,” a source told US Weekly. “At the end of the day, it was better for him to just continue his own tour.”

A bigger question is still at hand: Who is going to tour with Brit Brit on her Till the World Ends tour?

“I think Usher’s really great right now. I think he’s really hot right now. That would be cool [to tour with him],” Britney told MTV News.

Um, don’t think that one is going to work — he’s already on tour. Plus, a Britney-Usher tour would cost even more than a Britney/Enrique tour.

We think a better choice would be another female artist — maybe Jennifer Lopez? Her star is on the rise again with American Idol, and her new single On the Floor. We’d love to see Pink too, but we doubt she’ll go on tour with a new baby on the way.

She could always go with an up-and-coming star to be her opener — maybe Selena Gomez or Demi Lovato? They do have the Disney thing in common. Paramore has lead singer Hayley Williams — and they attract the same sort of fans.

Don’t laugh — you know you want to hear Friday live. We’d pay to see it.

Whom do you want to see on tour with Britney?