Betty White is returning to television with NBC’s Betty White’s Off Their Rockers. Get all the details on her new prank show. 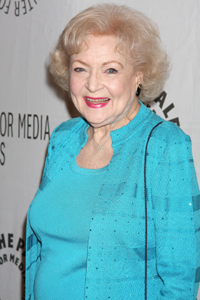 Betty White’s Off Their Rockers is basically like the MTV show Punk’d — only instead of Ashton Kutcher playing jokes, you have Betty White in charge of the pranks.

The show is executive produced by White and will feature seven senior citizens who play pranks on “unsuspecting younger people.” The show follows the same format as the European Benidorm Bastards.

?Paul Telegdy, NBC’s executive vice president, released the following statement about the new show: “Betty White is a comedic genius who escalates hilarity in any situation. Viewers will thoroughly enjoy watching her pull one over on the unsuspecting youth of America.” ??

In fact, NBC believes in the show so much they have already ordered 12 episodes of Betty White’s Off Their Rockers. Of course, the 89-year-old has a great track record with NBC after starring in the hit show The Golden Girls for seven seasons and her Emmy-winning performance on Saturday Night Live.

Chris Coelen, of Kinetic Content, produced Secret Millionaire and will also produce the 12 half-hour episodes of White’s new show. “NBC is a terrific home for great comedy and Betty White’s mischievous sense of humor is a perfect fit with this format which has shattered ratings expectations and garnered critical acclaim in every territory around the world,” said Coelen.

“People have been telling me that I’m ‘off my rocker’ for years — now I can prove it,” said White, who also stars in the TV Land sitcom Hot in Cleveland.