Wonder Woman is coming back to television at long last. But when NBC revealed Adrianne Palicki’s new costume, the Internet cried foul. We’ll let you know what changes they made. 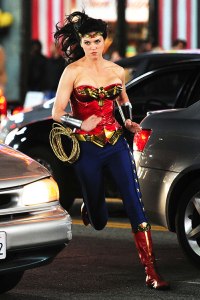 It’s been 32 years since we last saw Lynda Carter don her Wonder Woman costume on the small screen. After years of rumors about a film, stories about a magical script from geek god Joss Whedon and missteps and false starts, we’re finally getting a Wonder Woman series.

I don’t know about you, but I used to pretend to wield her Lasso of Truth and made her bullet proof bracelets out of scotch tape and construction paper. So I was thrilled to hear about the new series starring Adrianne Palicki. Enough with the male super heroes! Ladies can kick some butt too, right?

And then the first shot of the Wonder Woman costume hit the Internet. Everyone’s favorite goddess was wearing a Halloween costume! At least that’s what it looked like — a super tight, shiny red bustier (fine so far) with shiny blue leggings that looked like they might have been painted on with liquid latex and high-heeled blue…blue boots! (Any comic book fan worth his or her salt knows that the boots are supposed to be red.) There was also some intense red shiny lipstick. Fine for a publicity shot, but as all women know, put gloss on top of red lipstick and you have a slimy red mess.

The web exploded with critiques. “How is she supposed to fight crime in that?” “If she tries to kick anyone, her pants are going to rip!” “I think I saw that outfit in a fetish catalogue.” And my personal favorite, “Why, oh why do men think women can fight crime in heels? Try walking in them for a few minutes and see if you can stay upright!”

Well, it looks like NBC heard you loud and clear my friends. Take a look at the action shot above. Notice a difference? The pants have been toned down from their almost fluorescent shade of blue. They look like they might be made of fabric instead of paint. The boots are back to their original shade of red and almost flat! Crime fighting requires a sensible shoe. Am I right ladies? And that shiny red lipstick is gone. Now, I’m not going to argue about the fact that she’s going to need industrial strength tape to keep her assets in that bustier, since the costume has always been that way. I’m just happy to see Wonder Woman look like a woman and not a porn star.

So what do you guys think of the new costume? Are you excited for the show? And does anyone else think it looks like they digitally cut a few inches off her in the first photo? She looks like a healthy woman who could actually do some damage in the action shots. Sound off below.