The Seattle Grace docs fight to save Callie and her unborn baby on tonight’s Grey’s Anatomy: Song Beneath the Song. Sara Ramirez leads the cast in this music event and Private Practice‘s Kate Walsh returns, but don’t let the idea of song and dance or the reunion fool you: You’ll need a tissue box for this emotional ride!

After Arizona popped the question on last week’s Grey’s Anatomy, a car accident sent Callie through the windshield, putting her and Mark’s baby in danger. “There’s a lot at stake in this episode,” executive producer Shonda Rhimes warned. “There’s a lot of injuries sustained.” 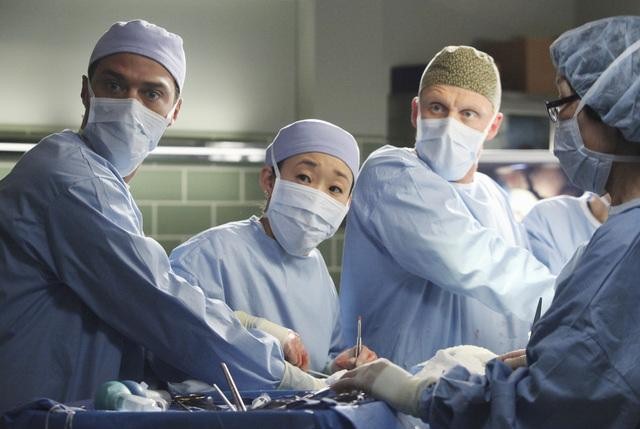 While Callie’s loved ones fight to save her and the baby on tonight’s Grey’s Anatomy: The Music Event, the pregnant doc is trapped in her head, where life is a musical.

“She’s having this out of body experience, which can happen in this state of coma,” Eric Dane (Mark) explains. “That’s where the singing comes in.”

While the drama unfolds, Tony winner Sara Ramirez (Callie) belts out tunes, along with just about all of her costars. Kevin McKidd (Owen), Chandra Wilson (Miranda), Chyler Leigh (Lexie), Jessica Capshaw (Arizona) and guest star Scott Foley are among the Grey’s cast members who hit the studio to record tracks for the highly anticipated episode.

“There’s a lot of iconic music in Grey’s Anatomy that we’re going to be using — some well-known stuff, like Chasing Cars (Snow Patrol), How to Save a Life (The Fray),” Ramirez previewed. “We’re hoping to bring these songs to life in a way the audience hasn’t seen before. We’ve got a lot of talent on the show and I think the audience and the fans will be really surprised by some of the voices. It’s a love letter to the fans.”

Not everyone joins in on the singing, however. Some, like Jesse Williams (Avery), stick to chorus work, while Patrick Dempsey’s (Derek) voice is apparently so bad he wouldn’t even attempt that. “I have no voice at all, so I was very adamant not to sing,” Dempsey told People. “I’m very much happy to be supporting the rest of the cast in this one.”

Will the Grey’s Anatomy musical event be a hit? Will it go so far as to kill off Callie or the baby she, Mark and Arizona have been anxiously awaiting?! Tune in tonight to find out!

Grey’s Anatomy: Song Beneath the Song airs Thursday, March 31 at 9 p.m. on ABC. The Grey’s Anatomy: The Music Event soundtrack also drops Thursday, and if you haven’t heard the news, Sara Ramirez released her own self-titled EP this week. Get the story on that here.

60 mins ago
by Alyssa K. Davis