Tangled has earned over 400 million dollars in international box office and we’ve got an exclusive clip from the film that stars Mandy Moore and Zachary Levi.

Disney’s Tangled is a fresh take on the Rapunzel fairy tale. The story is updated in many ways, but most notably through the making of the central female character as much more empowered. This is a damsel who is not in distress and certainly doesn’t need a man to save her. But, of course, there is a guy and he’s a rather cute one at that. 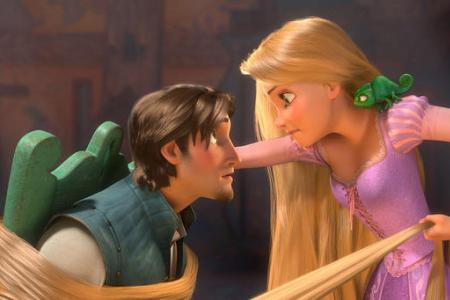 Mandy Moore plays Rapunzel and Zachary Levi is the dashing Flynn Rider, a thief who is actively seeking a better way to make a living. When we had our exclusive interview with Levi, it was clear that the honor of appearing in a Disney animated film moved him beyond compare.

“It is pure bucket list, man. I don’t think they [Tangled producers] realize how much it means to me. I am such a Disney nerd. I really am, not just stuff that is my generation like Little Mermaid on, Aladdin probably being my favorite of all that stuff, but going way back to really classic Disney and not just like the big features that everyone knows, but little featurettes like Pecos Bill, Johnny Appleseed, Paul Bunyan, Lambert the Sheepish Lion, Ferdinand the Bull and Suzie the Car,” Levi said. “To be here at Disneyland talking to you about a Disney movie, I have to ask myself, ‘What’s going on [laughs]?'”

Mandy Moore chose the role because of in her new character incarnation; Rapunzel has the power to inspire young women. “Yeah, I think the biggest thing that jumped out to me and probably to everyone else is just the idea that for her entire life, Rapunzel was told that it was her 70 feet of magical long hair that made her special. It separated her from everyone else. Really, it was something she had within herself the entire time. It had nothing to do with her hair. I love that,” Moore said. “I love having the opportunity to portray a young woman who is so fearless and confident.”

In our exclusive clip, Disney’s creative team behind Tangled takes us inside the building of a hero, the character of Flynn.

Read on for more Tangled