Grey’s Anatomy: The Music Event takes us on an emotional romp through the mind of pregnant Callie, but there’s more to the story than the March 31 episode. Tony winner Sara Ramirez leads the way in this “Callie-centric” musical, while promoting her new mini-album, Sara Ramirez — EP. 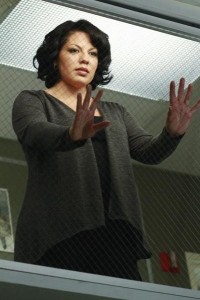 The Music Event has been all anyone can talk about for months and it’s finally here, along with an album from Sara Ramirez!

When an accident leaves Callie fighting for her life and the life of her unborn baby Thursday night, Grey’s Anatomy ups the ante and goes musical. In what promises to be an emotional ride, the Grey’s cast will perform Chasing Cars (Snow Patrol), How to Save a Life (The Fray) and The Story (Brandi Carlile).

“Sara does two versions of The Story — one on her album and a totally different version for the Music Event!” Shonda Rhimes tweeted.

While some Grey’s Anatomy: The Music Event previews are referring to Sara Ramirez’s pipes as her “secret,” the Grey’s Anatomy star and Juilliard alum actually has a Tony in her pocket already. Ramirez got her start on Broadway in 1998 and earned the Best Featured Actress in a Musical nod for her portrayal of Lady of the Lake in the 2005 Broadway musical Spamalot.

Ramirez also chimed in on the Grey’s soundtrack for the November 2009 Holidaze episode, lending her voice to an a cappella rendition of Silent Night.

“She’s pretty amazing!” costar Kevin McKidd raved to People. “I mean, off the chart. She’s a Tony Award winner for a reason, and the rest of us bask in her shadow.”

To coincide with the Grey’s Anatomy musical episode, singer-songwriter Ramirez has dropped her own self-titled CD this week.
“I am excited to share with you that my first EP will be released on Itunes!!!” Ramirez tweeted via her boss Shonda Rhimes’ account. “I co-wrote three of the four songs. I am very proud of them. They are my babies. Please be kind to the babies. Even if you think they’re ugly.”

The Sara Ramirez — EP features four tracks, including Break My Heart, Waitin, Eye to Eye and that alternate version of The Story. You can find it here on iTunes and SheKnows also tracked down a video of Ramirez singing The Story at the Grove in Los Angeles.