Charlie Sheen will return to television when he makes an appearance on Drew Carey’s new improv show called Improv-A-Ganza. We know Charlie Sheen has Adonis DNA — but does he have improv skills as well?

Charlie Sheen made a surprise visit on Drew Carey’s new improv show for the Game Show Network called Improv-A-Ganza. The show was taped in January at the MGM Grand Hotel and Casino in Las Vegas — before Sheen’s famous public meltdown and firing from Two and a Half Men. 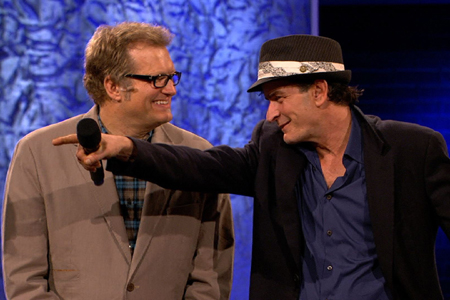 The show that Sheen crashed involved each cast member taking turns adding lines to a story that was unscripted.

Carey, who starred in Whose Line Is It Anyway? and hosts The Price Is Right, will premiere his new show, called Drew Carey’s Improv-A-Ganza, on April 11 at 8 p.m. on the Game Show Network. The Charlie Sheen episode will air on April 12.

Stay tuned for an exclusive backstage interview with Drew Carey by our very own SheKnows Entertainment editor Joel Amos — who also checked out the show!!