The first contestant on season 12 of Dancing With the Stars had to hang up his dancing shoes. Find out who got eliminated and which pro dancer disagreed with Chris Brown performing on last night’s show. 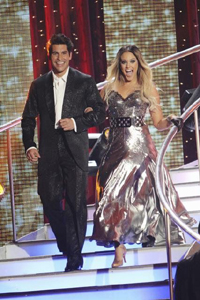 The three contestants that had the lowest scores on season 12 of Dancing With the Stars were Mike Catherwood, Wendy Williams and Sugar Ray Leonard.

Catherwood, radio host of Kevin and Bean and co-host of Loveline, is the first contestant to be booted off Dancing With the Stars.

He and his dancing partner, Lacey Schwimmer, took the elimination in stride. “It’s been such an amazing experience overall,” said Catherwood, who thanked the judges and fans. “It sucks to be sent home first, but I’ve made a lot of good friends.”

Catherwood went on to say that he is a little relieved to not have to dance anymore, but is happy he made a new friend in his dance partner Schwimmer.

“I’m sure there are a lot of past competitors that sparked a dancer within them, but I am not one of those people,” Catherwood told People. “If anything, the only relief that comes with being eliminated tonight is knowing that I don’t have to go back in and frustrate myself and Lacey with my horrible dancing.”

Besides the elimination, another hot topic coming from Dancing With the Stars was the controversial performance of Chris Brown. The singer performed on the show to promote his F.A.M.E. album, however, pro dancer Cheryl Burke spoke out on the decision to have him on the show.

“As a victim of domestic violence, I don’t agree with him coming on the show, but it’s out of my control,” Burke told reporters after the show.

Kirstie Alley reportedly didn’t want to be around him and implied he made her “uncomfortable.”

In fact, an insider told Popeater, “Usually when a big star comes in to sing, the entire cast is excited to meet them and spend the day together at rehearsals. With Chris, no one wanted to be around when he rehearsed.”

Read on for more Dancing With the stars