Rosie O’Donnell returns to the talk show circuit for OWN this fall and the Emmy-winner nabbed a studio that’s filled with great vibes: O’Donnell is moving into Oprah’s Chicago stage at Harpo Studios.

After 25 years on air, The Oprah Winfrey Show will go dark after its final episode airs on May 25, 2011… and then Rosie O’Donnell is moving in! 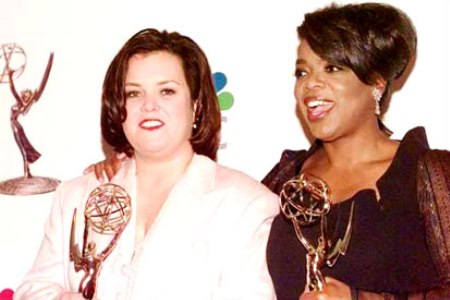 “I just wanted to say: Hi, I’m coming to Chicago,” Rosie O’Donnell said in a video to Harpo staffers. “Yes, I am, and I’m thrilled about it. Thank you, Oprah. And thank all you people there. Some of you are going to be sticking around and helping us make a kick-ass show for the Oprah Winfrey Network.”

OWN has already ordered 130 episodes of Rosie’s new one-hour talk show, which is set to premiere sometime next fall. O’Donnell plans to create a new show that measures up to her own Emmy winning Rosie O’Donnell Show (1996-2002), as well as The Oprah Winfrey Show.

“Come fall 2011, daytime television will change in a very dramatic way,” O’Donnell said in a statement. “I want to build on what Oprah began and excelled at for 25 years, in my own style and with new adaptations and ideas. I would like this show to make a difference in viewer’s lives, to be real, uplifting, authentic and focus on life, love and laughter.”

O’Donnell also revealed that her new show at Harpo will ditch the celeb focus of her former talk show. “The show will be about real people and real issues,” she told Oprah magazine. “I’ll focus on a single topic for one hour, things people deal with every day. Raising children. The education system in America. Autism. Relationships, health, weight, depression — and happy stuff too, of course. I envision the show being full of love and laughter.”

It was no fun watching O’Donnell clash with Elisabeth Hasselbeck on The View, and the daytime diva didn’t like it either. Her tenure didn’t last long, but she hasn’t been resting on her laurels since leaving the talk show circuit.

In addition to playing a recurring judge in Drop Dead Diva, the family woman is a partner in the LGBT vacation company R Family Vacations. O’Donnell was also behind the HBO specials All Aboard! Rosie’s Family Cruise and A Family Is a Family Is a Family. Her Sirius XM Rosie Radio show will end when she starts her new gig at Harpo Studios.

Will you be tuning in when O’Donnell comes to OWN?