Kevin Federline is going to be a father for the fifth time — girlfriend Victoria Prince is pregnant! 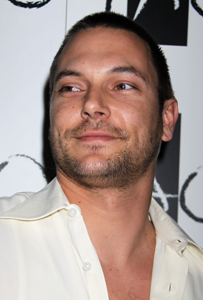 As unbelievable as it seems, at least one woman wants to have sex with the sea slug that Kevin Federline has turned into — and the proof is in the belly of Victoria Prince.

Prince, a former pro volleyball player, is reportedly pregnant with Federline’s fifth child. He already has two with Shar Jackson, whom he left when she was pregnant for Britney Spears. He and Britney have two boys together.

Federline struck gold when he and Spears divorced and the pop star lost her mind, getting a huge settlement and a hefty monthly child support check, which he no doubt uses to support his other kids since he doesn’t have a job.

Prince, who has been sporting a noticable bump lately, is said to be about five months along. Reps for the couple had no comment. A source close to Spears simply said, “She’s focused on her work right now,” which probably means no one has told her yet.

Federline and Prince have been dating since 2008.