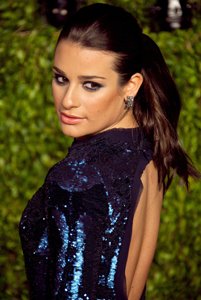 Lea Michele is counting her blessings today after escaping injury in a car accident in Los Angeles Friday.

The Glee star was leaving a late night taping of her hit show when the crash occurred.

Michele was driving on Melrose Avenue at approximately 2 a.m. when she was hit by another car. Police have not released any information on whether the other driver was drunk or otherwise impaired.

“Lea was hit and notified the police,” her rep told E! News. “She was not injured and is fine.”

This isn’t the first time Lea Michele has been in a car crash. She showed up to her callback audition for Glee with cuts and glass in her hair because she had a fender bender on her way there.

Maybe she should hire a driver?

read on for more lea michele