Kirstie Alley and Maksim showed off more than their dancing moves as they ended their quickstep with a big ol’ kiss. 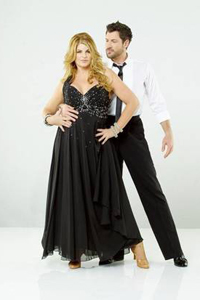 Kirstie Alley continues to dazzle audiences and the judges on Dancing With the Stars. The 60-year-old actress and her dancing partner, Maksim Chmerkovskiy, performed a quickstep on Monday’s show — and ended their performance with a long kiss.

“The connection between you and Maks? That was unstoppable!” said judge Carrie Ann Inaba. “You are so in your element! I love you, watching you dance. It was faaaabulous.”

Alley, who confided she had 40 pounds left to lose, opened up to Maks during rehearsals about her weight. “I’ve never been confident with where I am [no matter how much or little I weighed],” she said. “You have to find a [weight] where [you feel], ‘This is good.’ I don’t want to be dead when I do that!”

Alley may be feeling self conscious about her weight, but Kendra Wilkinson told Us magazine that Alley is her biggest competition. “Kirstie Alley, that’s my competition,” said Wilkinson. “Dancing With the Stars is not all about being a pro dancer, it’s about personality and popularity.”

Kirstie and Maksim received 20 points for their performance, putting them in second place behind Ralph Macchio. Mike Catherwood got the lowest scores from the judges this week.

Watch Kirstie Alley and Maksim perform the quickstep — that ends with a kiss: