We chatted with the brains behind the movie Hop — director Tim Hill and producer Chris Meledandri. These two guys have some big hits under their belts, including Alvin and the Chipmunks, Ice Age and Despicable Me. Find out how they took their vision of the Easter Bunny from the drawing board to the big screen. 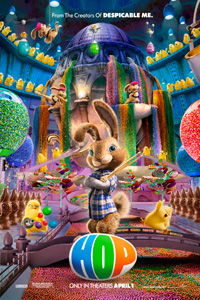 Before working on Hop, Tim Hill’s impressive resume includes writer and developer of SpongeBob SquarePants and Alvin and the Chipmunks. He and Chris Meledandri, the producer of Hopand CEO of Illumination Entertainment, worked together on Alvin and the Chipmunks and came together for this movie that mixes amazing animation with live action. Meledandri also helped to supervise or executive produce other hit movies such as Ice Age: The Meltdown, Robots, The Simpson Movie and Dr. Seuss’ Horton Hears a Who.

Hill and Meledandri sat down for a roundtable discussion to discuss their new movie. Note: Not all of the questions came from me, but to avoid confusion they are indicated as so.

SheKnows: Where did the idea to create a live action, animated Easter movie come from?

Chris Meledandri: The original notion was to reveal a side of our Easter mythology that nobody’s ever seen before. Once we started thinking about that, it opened up all sorts of possibilities. This idea of doing it through the perspective of the Easter Bunny’s somewhat rebellious, subversive son felt like a great way to go. The story isn’t Easter-specific. It felt like a great character direction in which to play a story against these secrets about a mythology that we’re all familiar with.

SheKnows: You spoke about the mythology and creating that and coming up with those ideas. Did you feel the weight of that? You were talking about the fact that there really isn’t something already out there that says what really happens at Easter like there is with Christmas.

Chris Meledandri: There were a lot of ideas in the initial script development, but fortunately for me, I got to pass that burden to Tim.

Tim Hill: You’re right to point out that it has a mythology all to its own that we invented, but we did take a page out of the Christmas movie. When you think about Christmas movies, Santa has his North Pole. He has his mode of transportation and then there have been hundreds of movies about that space that he works in and what he does on Christmas and how important it is to the world. We did look at that, but I’m sure it informed us in some way of, as you look at it, what happens? Well, how did they make all this candy? What do they do all year long? They make candy and they fill Easter baskets full of candy and they put them in this egg-shaped sleigh, which is pulled by 100 little chicks. 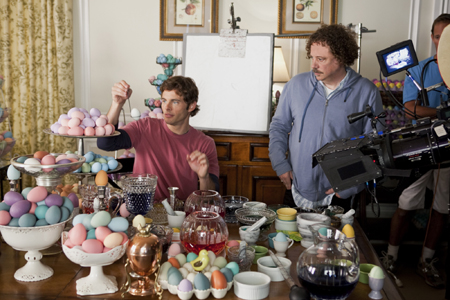 Tim Hill: We decided that if you talked to the Easter Bunny, he would say that he was there before Santa. That tradition was before the Christmas tradition, only because the Easter Bunny is actually a pagan tradition.

Chris Meledandri: Just to add to that, ultimately, the story is from a character perspective and it’s a big, fun, charming, entertaining movie, but it just gives you insight into the way we think. One thing that Tim was very intent on was that, if we were going to be peeling back the curtains of this mythology that you’ve never seen before, that just the depiction of the world itself visually had to be spectacular. It had to have the scale of spectacle that you would associate with a part of our cultural mythology. Tim worked for months and months and months with our teams of artists in really trying to visually define what this magical place underneath Easter Island has, what it would look like. 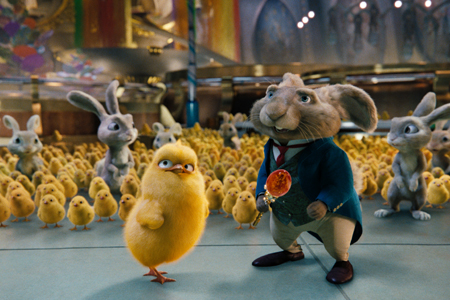 SheKnows: I thought the music felt modern and it created that really crazy, modern, fun feel. How did you decide on what music to use? And how did you decide that E.B. should play the drums?

Tim Hill: We definitely looked for both popular music and stuff that was drum-able. Or if it wasn’t, we would make our own drum track. For example, that Taio Cruz song, when you listen to it without the drum, there’s not really that much there. But, we took it. We had Ali Dee from New York, who worked on Chipmunks with me, putting drum tracks on it. It’s a funny thing but as a side story, the way they animated him drumming is how we would actually record the guy drumming in the studio and then we would send that to the animators at Rhythm.

SheKnows: When you came up with the concept, were you looking to go across all age groups? Was that the original concept or did that evolve?

Chris Meledandri: We make movies from the perspective of what we like and it just so happens that what we like has the opportunity to play across broad audiences. The story themes that we’re talking about are things that are certainly going to be more relevant to parents or people who have recently gone through an understanding of what it’s like to transition to adulthood. The choice of Russell Brand, who is an actor that has these wonderfully subversive qualities, but what Tim and Russell discovered, he’s irresistibly charming. It’s our hope that the elements that are in this movie are elements that will speak to audiences of all ages and transcend the notion that all of us remember the magic of Easter from our childhood. But, we’re also all kind of grown up children, too. 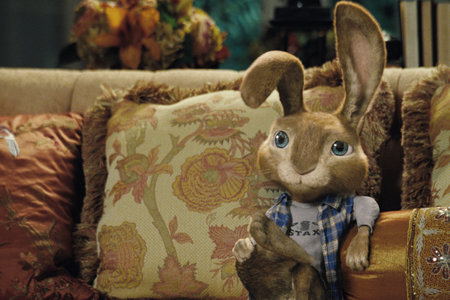 SheKnows: I was struck by the fact that the movie, in spite of some very complicated themes, did not get at all dark. The scariest things were the pink berets. Was that a conscious decision to keep it from getting too dark?

Chris Meledandri: I think that the movie is a reflection of who Tim is. Tim is somebody who’s thinking about themes and things. As an artist, as a filmmaker, going to the dark place is not where he goes.

SheKnows: When did the decision to involve David Hasselhoff come into it?

Tim Hill: The idea of the scene was that we were trying to deal with the bunny talking and who would be shocked and who wouldn’t. A waitress who’s seen it all would say, “Whatever.” Hasselhoff talks to a car or he did for a long time. So, he wouldn’t be fazed. I think that’s how that idea came out. Also, we really wanted E.B. to have a venue to audition, and what better place than in a theater in front of David Hasselhoff? The idea of David being larger than life, having the humor to make fun of himself and to say, “I didn’t like it. I loved it.” As the camera is pushing in on him and for him to play along with us like that, we didn’t anticipate that, of course, but it all worked out really well.