Willie Nelson will avoid jail time for his 2010 marijuana bust — as long as he sings for his freedom. 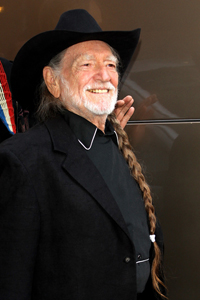 Willie Nelson was busted for drug possession in November 2010 after cops found six ounces of marijuana on his tour bus. Now Texas officials are basically saying they are so starstruck they’ll let him off with a song — literally — even though the country singer already has a criminal drug record.

As Hudspeth County attorney Kim Bramblett put it, “You bet your (expletive) I ain’t gonna be mean to Willie Nelson.”

Bramblett’s plans are pretty simple. “I’m gonna let him plead, pay a small fine and he’s gotta sing Blue Eyes Crying in the Rain with his guitar right there in the courtroom.”

Even the judge is in on it. According to Bramblett, “She wants to meet Willie.”

How are they getting away with this? According to Bramblett, although the amount of weed Nelson was busted with was originally thought to be six ounces, it actually measured less than three. Hmm…

“Between me and the sheriff, we threw out enough of it or smoked enough so that there’s only three ounces,” Bramblett joked.

Celebs: They’re different from you and me.