CBS is so desperate to keep Katie Couric on the network that they have offered her a coveted spot on 60 Minutes even if it means she leaves the nightly news slot. 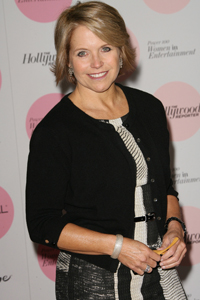 Katie Couric is considering whether or not to stick with her current gig as anchor of the CBS Evening News — as the clock ticks on her contract — but the network wants to make sure that even if she doesn’t stay behind the evening news desk, Couric still stays with CBS.

Because they are afraid of Couric defecting to another network when her contract expires in June, CBS is reportedly offering her a sweet gig to stay with them: A regular slot on 60 Minutes and her own daytime talk show!

Here’s how it went down, according to the New York Post:

When Couric signed her original contract in 2006, the network agreed to give her six contributions a year to 60 Minutes — but Jeff Fager, the head honcho over at 60 Minutes, never let it happen.

Fager was put in charge of all CBS News last month, pretty much ensuring that Katie wouldn’t extend her contract (what goes around comes around, you know).

Enter Les Moonves (yes, the same guy who has become one of Charlie Sheen‘s mortal enemies). Moonves is the top boss at CBS, and while he doesn’t seem to have the gumption to push Fager into keeping Couric in the anchor seat, he does want to keep her at the network.

The 60 Minutes gig would help ease bruised egos, but the real sweet part of all of this is the talk show. Oprah ends her landmark daytime reign on May 25, leaving an awfully big hole to fill in the afternoon slot. Katie Couric could fill that very nicely.

What does she have to say about all this? Not much — she’s busy sitting on a beach somewhere.

“Katie’s on vacation this week,” said her spokesman. “Hopefully, the speculation about Katie can take a week off, too.”