With her album Femme Fatale set to drop Tuesday, Britney Spears continues to build the hype. This Friday, she took the stage for two unannounced shows at Rain Nightclub at Palms Resort Casino in Las Vegas and rocked the house.

For the past few months, Britney Spears has been using the Internet to her advantage, offering regular sneak peeks and previews of her upcoming album, Femme Fatale. With the album set to drop this week, however, she took it to the stage, giving surprise performances of her singles Hold It Against Me, Till the World Ends and Big Fat Bass in Las Vegas Friday night! 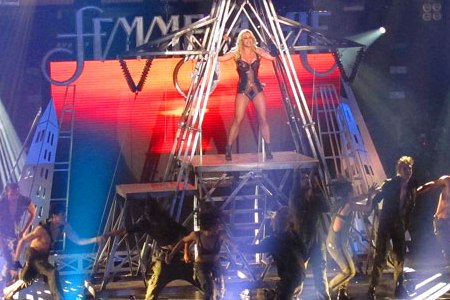 “OMFG it feels good to be on stage again!” tweeted the pop diva, who did a private show at 8 p.m. and then, after Pauly D’s (Jersey Shore) deejay set, took the stage for a very public midnight performance.

Brit Brit’s surprise performances were caught on tape and will be part of her MTV special promoting Femme Fatale. The special will air Tuesday, March 29, to coincide with the album’s release.

With about 1,500 clubgoers in attendance for her big surprise show, however, videos of the performance are already all over YouTube.

Hardcore Brit Brit fans will recall this isn’t her first surprise rodeo at Rain Nightclub: Spears pulled off a similar feat back in 2003. This time, the only warning was a string of early tweets on Friday morning.

Word is, Spears delivered on stage and while Femme Fatale isn’t the first album to be touted by many as her comeback, it is definitely getting rave reviews. Us magazine even called it Brit’s best ever, while EW gave Britney Spears’ Femme Fatale a B-plus. It bares mention, however, that the EW review didn’t actually make it sound like Femme Fatale deserved the rating they gave it…

That’s why it’s always best to judge for yourself: Femme Fatale is already streaming here, so check it out and let us know what you think.