Lindsay Lohan won’t be joining the single-name ranks of Madonna, Oprah and Beyonce anytime soon, according to her rep. 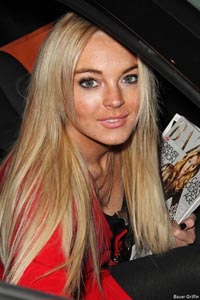 Dina Lohan apparently was misinformed when she claimed that her eldest daughter, Lindsay Lohan, was dropping her last name to distance herself from her felony-prone father, Michael Lohan.

“Lindsay Lohan has not changed her name,” Lohan’s representative said in a statement to OnTheRedCarpet.com. “It remains Lindsay Lohan.”

Dina Lohan told PopEater that all three of the Lohan women — Dina, Lindsay and Ali — were changing their last names.

“Lindsay is dropping the Lohan and just going by Lindsay,” Dina Lohan said. “Plus, me and Ali will be officially changing our last names back to my maiden name, Sullivan.”

“So many of the greatest people in showbiz are known by just their first names. Look at Oprah and Beyonce. Now you can add Lindsay to that list,” a source told PopEater.

Of course, Michael Lohan took time out of his busy lawbreaking schedule to speak out about it on CNN’s Headline News.

“I don’t think it’s true at all. I would never imagine any of my kids changing their name, especially Lindsay,” Michael Lohan said. “Could it have to do with the drama with Kate? You never know. With all due respect… Dina has said a lot of things over the years that have never come to fruition.”

But her last name isn’t the only thing Lohan’s thinking about these days. Word on the street is that Lohan is seriously upset with her on-again, off-again girlfriend, Samantha Ronson. The DJ was recently photographed kissing another woman, and Lohan is heartbroken because she thought Ronson was single, according to TMZ.

To make matters worse, Lohan was spotted recently leaving Ronson’s Venice apartment with an “I love you” bear presumably given to her by Ronson. TMZ is reporting that Lohan is planning to confront Ronson about the lip-locking rumors tonight.

Watch out, Ronson. You know what they say: “Hell hath no fury like a woman scorned.”