Charlie Sheen launched a Twitter attack Monday against his ex-wife, Denise Richards, calling her a “vile kidnapper.” You’re not going to believe her reply.

Charlie Sheen took time out of his busy sarlock schedule to blast ex-wife Denise Richards for taking away his two dogs. 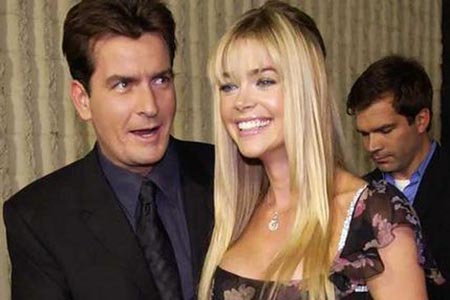 “We must bombard with warlock Napalm, that traitor and loser whore #DUH-neese POOR-ards. A vile kidnapper and now dog thief. hate. SBW c,” Sheen tweeted Monday morning about the mother of his daughters, Sam and Lola.

The whole issue surrounds the couple’s two pugs. Apparently, the two dogs belonged to Richards, but she let Sheen keep them after the couple divorced. He gave the dogs back to her after his infamous meltdown at NYC’s Plaza Hotel in October.

“Denise didn’t steal the dogs; he gave them back to her,” a Sheen friend told PopEater’s Rob Shuter. “They were in horrendous shape. He doesn’t want the dogs. He wants to fight!”

“They were in terrible shape. He could not look after himself, let alone two dogs,” the friend continued. Sheen apparently gave them to Richards as a “thank you” gift for her support.

Richards is known for her work with animal rescues. She even tweeted a picture from an animal shelter Monday afternoon. She’s apparently working on an animal show for A&E.

So why is Sheen hurling all these awful words at the ex he called “smoking hot” during recent interviews? Because Richards wouldn’t let Sheen exploit their daughters for a Dateline special.

“When his sons with Brooke [Mueller] were removed from his custody last month, he asked Denise to bring their daughters to tape interviews, and she said no,” the source told Shuter. “Since then, things with Charlie have been very, very ugly. Once you offend him, he will go out of his way to destroy you.”

Apparently, warlocks with tiger blood never grow up. You’re not winning with this, Charlie Sheen.