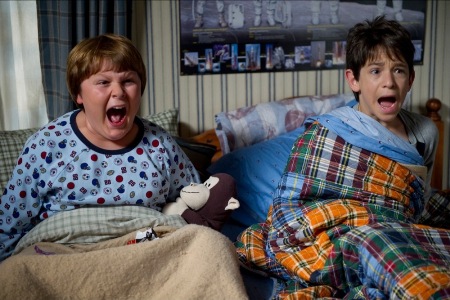 Diary of a Wimpy Kid: Rodrick Rules came in first for the overall weekend box office bank, with $23.8 million. That easily covers the film’s production costs of $21 million and also tops the original Diary of a Wimpy Kid premiere numbers. The first installment based on the children’s book series opened last year with $22.1 million and then topped off at $64 million, with an additional $11.7 million overseas.

Clearly, we can expect to hear about a Wimpy Kid three!

The much-hyped Sucker Punch didn’t fare as well, but it remains in the game. Sucker Punch came in second, with $19 million, recouping a small percentage of its $75 million production budget. The girl power action movie features Emily Browning, Abbie Cornish, Jena Malone, Vanessa Hudgens and Jamie Chung and hopes to keep building its audience, but that may not happen.

Sucker Punch director Zack Snyder’s next project, Superman: Man of Steel, is expected to fare better, since it has a storyline with mass appeal. “The support for Snyder will be colossal,” promised Warner exec Jeff Goldstein.

The new arrivals knocked last week’s winner, Limitless, to third place. The Bradley Cooper/Robert De Niro high action thriller banked $15 million this week, for a gross of $41 million so far. That easily covers the $27 million production budget and means we can expect the Cooper vehicles to keep coming.

The Lincoln Lawyer maintained its place at number four. The Matthew McConaughey and
Ryan Phillippe drama has brought accolades for shirtless McConaughey, but only banked $10.7 million this weekend, for a $28.7 million total.

Johnny Depp’s Rango fell hard from second place, but stayed in the top five with $9.7 million. After four weeks in the top ten, Rango passed the $100 million mark with $106 million.

Just Go With It didn’t make the top ten this weekend, but it did manage to pass that same mega marker, becoming the twelfth Adam Sandler flick to bank over $100 million.

Nick Frost and Simon Pegg’s Paul was bumped out of the top five, coming in sixth with $7.8 million. Battle: Los Angeles dropped from third to seventh, banking $7.6 million. Red Riding Hood, The Adjustment Bureau and Mars Needs Moms closed out the top ten, ranking in the same order as last week.