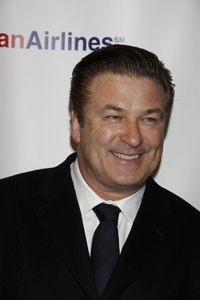 Alec Baldwin has picked up many awards for his role as Jack Donaghy on the NBC hit show 30 Rock, and he now has one more award to sit next to his two Emmy Awards, three Golden Globe Awards and five Screen Actors Guild Awards.

Baldwin received the Best Comedy Actor in Television prize at the first ever Comedy Awards which were held March 26. Other winners included his 30 Rock co-star Tina Fey, who won Best Comedy Actress for her movie Date Night.

The movie Dinner for Schmucks made winners out of Kristen Wiig and Zach Galifianakis, while Modern Family, The Daily Show with Jon Stewart and South Park all received honors as well.

Baldwin has put his success and fortune to good use, as he recently donated more than a million dollars to the arts in order to “draw awareness to the power of the arts — and help turn the tide in deep funding cuts slamming groups around the country.”

You can check out the first ever Comedy Awards when they air April 10 at 9 p.m. on Comedy Central, Logo, TV Land, CMT, Spike TV, VH1 and Nick at Nite.