Happy birthday, Julia Stiles! The Dexter actress says she is ready for this new milestone. 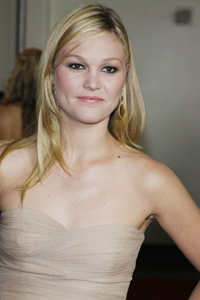 Julia Stiles celebrated her 30th birthday today! The actress, who has been acting since the age of 11, rose to fame after starring in the movie 10 Things I Hate About You with Heath Ledger. She went on to appear in movies such as The Bourne Identity, Save the Last Dance and Mona Lisa Smile.

Stiles recently received a Golden Globe Award nomination for her role as Lumen Pierce in the fifth season of the Showtime hit Dexter. The chemistry between Stiles and her Dexter co-star, Michael C. Hall, caused rumors that she was the reason for the split between Hall and his wife of almost two years.

Stiles denied the rumors. “I have absolutely nothing to do with the split between Michael and Jennifer [Carpenter],” she said in a statement to People. “We are good friends and enjoyed working together. This is a personal matter between them, and we should respect their privacy. Although I too prefer to keep my private life, private — I felt compelled to dispel the rumors I was somehow the cause for this matter.”

Apparently for Stiles, age does bring wisdom as she recently said she is ready for meatier roles. “I have a lot of goals in terms of acting,” she said. “I may have done a lot of movies, but I’m a little older now and feel hungry to sink my teeth into a role that’s very meaningful to me.”

Stiles will next star in the adaptation of Sylvia Plath’s famous novel, The Bell Jar.

Read on for More on Julia Stiles