Robert Pattinson is dishing on Breaking Dawn. He’s calling it a “horror movie!” 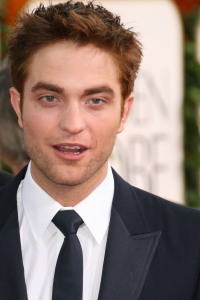 Robert Pattinson recently spoke to Entertainment Weekly about his upcoming film with Reese Witherspoon. But in addition to giving details on Water for Elephants, RPatz spilled some details about The Twilight Saga: Breaking Dawn.

So Twilighters, were you worried that director Bill Condon would tone down the more salacious bits of the final book in the upcoming films? Oh, you know which ones I mean. (Yes, this is a spoiler, but if you’ve managed to stay ignorant of “the scene” this long, you’re probably not reading this article.) Well, fear not, oh members of Team Edward and Team Jacob! Pattinson told EW, “There’s some interesting and weird stuff going on — very, very, very strange. It’s great. For a big mainstream movie, it’s the most obscure storyline and really outside the box. It’s a horror movie. I’ve seen a few bits, and I just can’t see how it’s going to be PG 13… unless they cut everything out.”

Well, we’re still not sure if they’re going to actually show the, um, details of the birth scene. It’s pretty graphic in the book. (Yes, I read them all.) But it certainly sounds like we’ll get a pretty darn good idea of what’s happening.

Pattinson also dished on what he will be happy to leave behind from his days as a vampire. “Those contacts…My God, I’ll be glad to see the last of those,” he said, “I actually want to get some kind of plastic explosive. I want to reanimate them into something so I can kill them. It’s embarrassing for me — after so many years, it’s still a process every single morning. Everybody else has figured out how to do it, and then there’s two people holding me down because I can’t do it myself.”

How far do you want to see them go in the horror department? Are you looking forward to the vast number of shirtless scenes Rob has admitted to having in the film? Are you all Twilighted out? Let us know below.