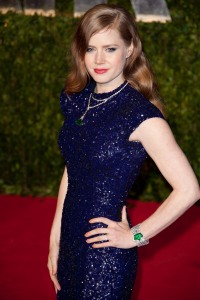 Want to know how to divert the public’s attention from the “Is Zack Snyder’s Sucker Punch a feminist movie or does it exploit women” debate? Announce the casting of a three-time Oscar nominee for his next film, Superman. The lovely and incredibly talented Amy Adams will be playing feisty reporter Lois Lane opposite Henry Cavill’s Man of Steel.

Adams is the latest name on a long list of ladies to play Lois Lane, including Erica Durance, Teri Hatcher, Kate Bosworth and Margot Kidder. The 36-year-old actress got the super news from Zack Snyder himself. He called her from Paris where he’s currently doing press for Sucker Punch.

Snyder said after the call that she was the perfect choice and the Internet has been buzzing ever since. “It goes back to what I’ve said about Superman and making him really understandable for today,” Snyder told the LA Times. “What’s important to us is making him relevant and real and making him empathetic to today’s audience so that we understand the decisions he makes. That applies to Lois as well. She has to be in the same universe as him [in tone and substance].”

I rarely mention age when I write articles, but there is a reason this time. Quite a lot of the buzz has been around Adams’ age. Oh yes, they’re saying she might be too old to play opposite the 27-year-old Cavill. I’ve even read more than one tweet calling Lois a cougar. Interesting, considering the Internet campaigns to get the 40-year-old Jon Hamm? to play Superman. We want to know your thoughts on this.

Is Adams the perfect choice for Lois Lane? Is there someone you’d rather see play the intrepid reporter? Are you disgusted with the age discussion? Sound off below.