Russell Brand uses his distinctive English accent and charm to play the teenage son of the Easter Bunny in the upcoming animated film, Hop. The Get Him to the Greek star chatted about childhood Easter traditions, rabbit “whoopsie” and why he believes in the Easter Bunny.

Russell Brand rose to fame in movies like Saving Sarah Marshall and Get Him to the Greek (and being Mr. Katy Perry didn’t hurt either) — so I was not surprised that he was as charming and full of life in person as he appears on screen. 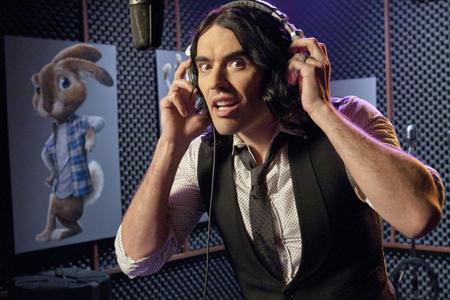 Brand voices the character of E.B., the teenage son of the Easter Bunny, in the new animated movie Hop. Tim Hill (Alvin and the Chipmunks, SpongeBob SquarePants) and Chris Meledandri (Despicable Me) are able to seamlessly integrate animation with live action in this fun Easter-themed movie. James Marsden, Kaley Cuoco, Elizabeth Perkins, David Hasselhoff and Chelsea Handler provide the live action, while Hugh Laurie and Hank Azaria provide their voices to this funny and charming movie.

We sat down with Russell Brand in a roundtable discussion to chat about his new role as E.B. in the movie Hop.

SheKnows: We have been informed that the rabbit wasn’t real. Now, is this or is this not true?

Russell Brand: I temporarily possessed him. Is that weird? Is that going to help? I possessed the Easter Bunny temporarily and was able to provide him with a voice. I have got a double identity where, by night, I transform into a rabbit, which is a difficult and painful process where my fangs grow and my fur grows and I contort like a werewolf.

SheKnows: So, you weren’t with any of your costars? How was that?

Russell Brand: They stuck me in a booth and just left me in there. I was lonely. There were some carrots. They said it would help with the character. I don’t like carrots. I could see better, though. 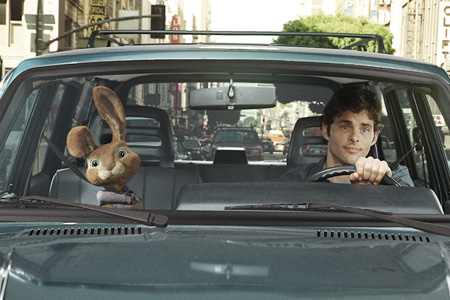 SheKnows: When somebody comes to you and says, “We would like you to play the Easter Bunny,” as a comedian, do you say to yourself, “Now, that’s funny,” or do you think, “I don’t know about that?”

Russell Brand: I liked the idea immediately. As soon as they asked, “Do you want to be the Easter Bunny?” — they didn’t even finish asking — and I said yes. At that point, they could have said, “Holidays, bonnet,” but it was “bunny” and it turns out it was the right decision. I liked it. 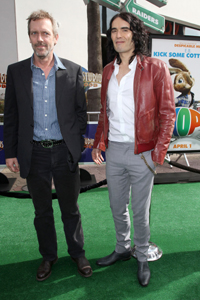 SheKnows: Chris Meledandri [producer of Hop] talks about the importance of having the characters be endearing and enduring. So, what is it that makes E.B. memorable?

Russell Brand: Well, firstly, he looks crazy. He’s a rabbit and he doesn’t have any trousers or pants on. That’s peculiar. I remember that, myself. And he has an evocative and playful spirit. The rabbit is a symbol in Native American mythology of the trickster often seen as the messenger between gods and man. Like Prometheus in ancient myth, who nicked fire from the gods, rabbits are almost mischievous. They’re always nicking our crops if you’re an agricultural type person. They’re playful little things, lovable and sweet. They have little twitchy noses. I did have one as a kid. He bit me there. And if you get a rabbit bite, no one really cares. It isn’t like a shark bite. “I was bitten.” “What?” “By a rabbit.” “Ah.” But, it still hurts.

SheKnows: The defecating jelly beans, does that come from ancient Greek myth? (In the movie, his character E.B. poops jelly beans that Kaley Cuoco unknowingly eats.)
Russell Brand: Well, there is a very ancient idea like Prometheus stealing fire or Orpheus going into Hades to get his wife back and stuff. It’s been placed into the semiotics of children because they’re colorful beans and candy, recognizable signifiers, but it’s still the idea of alchemy and transformation, magic making, mirth making and trickery. I thought Kaley Cocopops (Cuoco) just ate a bit of that rabbit’s whoopsie. Even actual rabbits’ whoopsies don’t look that bad. I remember having one. They’re like little, in your country, whoppers. You get them down at the cinema. 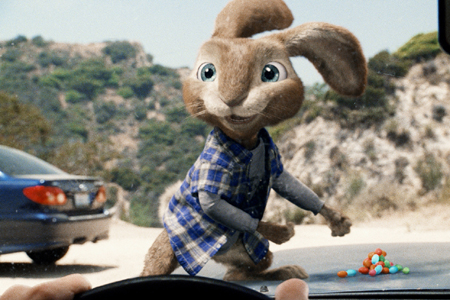 SheKnows: Do you think it’s just natural that the Easter Bunny is British?

SheKnows: Did you celebrate Easter growing up?

Russell Brand: Oh, you have to, don’t you? You get time off school. We weren’t so crazy about all the different traditions, like going on an Easter egg hunt. We don’t do that. Just have some Easter eggs, someone just gives it to you. They take the narrative drama of finding it in a garden right out.

SheKnows: Did you get a basket?

Russell Brand: Well, I never had a basket. I would just go down to Woolworth’s and get a Cadbury’s egg. It was delicious.

SheKnows: Did you ever or do you now believe in the Easter Bunny? 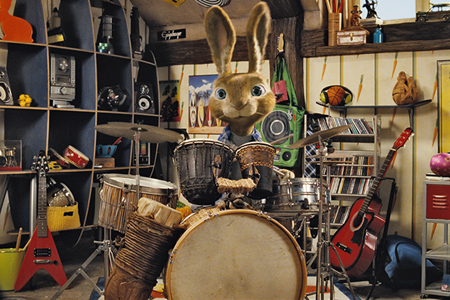 SheKnows: You voice acted in Despicable Me and now Hop. Do you like to do animated movies or live action movies?

Russell Brand: Both. I filmed Arthur and that, I like. That’s the real me. If I do a little cute face, everyone’s going to see.

SheKnows: Have you ever considered trying to host the Oscars?

Russell Brand: I’m going to give it a whirl. Give me that. (He pretends like he is grabbing the microphone away from someone.) I think there’s some sort of structure. They will ask politely, then there will be a period of negotiation, then there will be a bit where they worry that they’ve hired a maniac and then, eventually, it will finally settle down. I like hosting things.