Mariah Carey and husband Nick Cannon celebrated the singer’s birthday on Sunday, but the event was almost overshadowed by another milestone — the birth of their twin babies. Turns out it was just a false alarm. 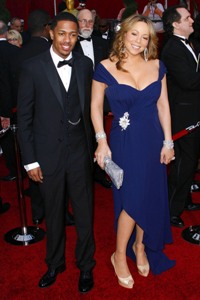 Mariah Carey, 42, celebrated her birthday Sunday with a few labor pains. The singer, who is expecting twins with husband Nick Cannon, took to Twitter to assure fans it was just a false alarm. The babies are still safe and sound in Carey’s belly while mom and dad are anxiously awaiting their arrival.

“So #dembabies really wanted 2 celebrate w/us/share the anniversary! I started having contractions last night…went 2 the hospital. Finally they said I could come home after they got it under control.”

Mariah Carey and Nick Cannon’s twins are due in the coming weeks but the mommy-to-be seemed okay with sharing her birthday with the babies — probably because she’s ready to meet the little ones. “They almost came on 3/27 — happy anniversary indeed!!! We have a few more weeks 2 go but- wow!!! : ) #soreadyallready!”

Carey’s husband Nick Cannon has been brushing up on his delivery room skills. In other words, he’s trying to find a way not to end up face down on the delivery room floor. The entertainer recently tweeted, “I am probably going to faint in the delivery room! I need to man up! Or maybe I should say woman up since they are the ones that have to be the strongest in the whole ordeal! I am in awe of my wife!”

Our best wishes go out to Mariah Carey and Nick Cannon on a healthy delivery when their twins do decide to come into the world!