Sucker Punch stars Emily Browning (The Uninvited) who plays Baby Doll, a girl who is taken to the mental asylum by her mean stepfather. Faced with the knowledge that she will undergo a lobotomy in a week, she and four other inmates, played by Abbie Cornish, Jena Malone, Vanessa Hudgens and Jamie Chung, retreat to a fantasy world in her imagination where they plan their escape. 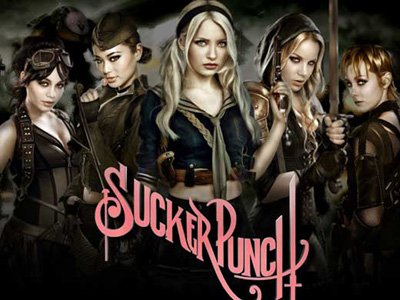 It is hard to determine what is real and what is fantasy as they fight their way through this fantasy world, trying to escape from the prison.

“I’m a big fan of Heavy Metal and fantasy art, so in terms of the setting and the way the world is built, that definitely comes in there,” Snyder explained. “And I love the sort of Twilight Zone type of storytelling, so that also fuels the vibe to the movie.”

The reviews of the movie have been mixed, ranging from USA Today’s review saying, “The action sequences, scored by a blistering techno soundtrack, are top-notch and prevalent,” to Cinema Blend’s scathing review, “The story’s so completely lifeless, the characters so hollow, the connection so non-existent, that you can’t even really sit back and enjoy the visuals.”