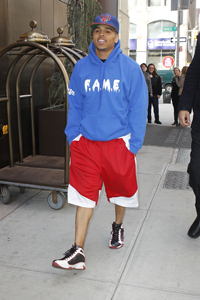 The publicist in charge of the latest Chris Brown record release has quit just days after the singer smashed a window with a chair and threatened a Good Morning America producer because he was angry over questions about Rihanna.

While the publicist, Tammy Brook, said Brown’s behavior has nothing to do with it, no one actually believes her.

“I am an entertainment/music publicist and was hired as a publicist, as they often are, to work specifically on his music publicity for the term up to the release of Chris Brown’s F.A.M.E. album, which was released on Tuesday, March 22 and is entering the Billboard and iTunes charts at number one this week.”

“I love and support Chris and it has been an honor to be a part of this album and I look forward to the possibility of working with him again in the future.”

Brown had no comment because he doesn’t have a publicist to release his statements anymore.