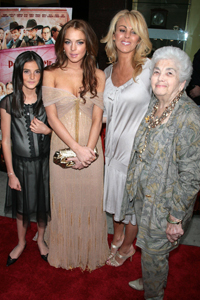 Lindsay Lohan is planning on dropping her last name, according to her mother Dina Lohan.

According to Dina, it sounds like her main motivation is to distance herself from her father Michael Lohan — but unlike Dina and little sister Ali Lohan, Lindsay won’t be taking on her mother’s maiden name.

“Lindsay is dropping the Lohan and just going by Lindsay,” Dina told PopEater. “Plus, me and Ali will be officially changing our last names back to my maiden name, Sullivan.”

A pal told PopEater, “So many of the greatest people in showbiz are known by just their first name. Look at Oprah and Beyonce. Now you can add Lindsay to that list.”

“And it’s a way for them all to start over,” the friend continued. “No one in the family wants anything to do with Lindsay’s father anymore and that includes sharing a last name.”

The-Lindsay-formerly-known-as-Lohan has a nice ring to it, don’t you think?