The American Idol 2011 elimination results left many surprised — even the judges! The bottom three of the night were Casey Abrams, Stefano Langone and Thia Megia. Find out who got eliminated — or was someone saved?

It was an action-packed night on the elimination show of American Idol on March 24, 2011. Steven Tyler celebrated his 63rd birthday on-air by being serenaded by Stevie Wonder singing Happy Birthday. Sugarland performed Stuck Like Glue and former American Idol alum Jennifer Hudson sang Where You At. Hulk Hogan even paid a surprise visit — with a fake sucker punch to Ryan Seacrest! 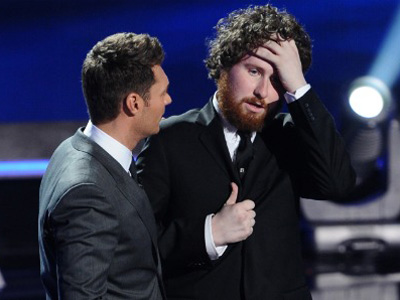 The bottom three were announced as Stefano Langone, Thia Megia and — to the judges’ surprise — Casey Abrams, who was announced as having the lowest scores and faced elimination.

Casey performed the song I Don’t Need No Doctor, hoping the judges would use their one save of the season on him. Randy stopped him mid-song and said, “Stop the music!”

“This is crazy wrong,” said judge Steven Tyler. “We’ve made the decision to keep you on.”

“We just want you to get back to being the musician you are,” said judge Jennifer Lopez. “Just let people feel your soul.”

Casey was ecstatic, however, that jubilation didn’t last long when Seacrest made the announcement that next week two contestants would get eliminated. He also announced more surprising news — that the top 11 would go on the summer tour, instead of the traditional top 10!

Tell us: Do you think the judges should have saved Casey Abrams?