Elizabeth Taylor was laid to rest on the same grounds as her long-time friend Michael Jackson. 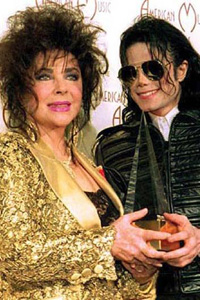 Elizabeth Taylorwas laid to rest Thursday and her burial spot will no doubt give the icon and beloved star comfort wherever she may be. Taylor’s funeral was held at Forest Lawn Memorial Parks & Mortuaries in Glendale, California which also happens to be the same place her friend Michael Jackson was entombed in 2009.

“Elizabeth Taylor was laid to rest this afternoon at a small private funeral service attended by family and close friends in the Great Mausoleum at Forest Lawn-Glendale,” her rep revealed to Access Hollywood. “The service was scheduled to begin at 2 p.m., but at Miss Taylor’s request started late. Miss Taylor had left instructions that it was to begin at least 15 minutes later than publicly scheduled, with the announcement, ‘She even wanted to be late for her own funeral.'”

There is no word on whether or not it was her wish to be buried on the same grounds as Michael Jackson or if it was mere chance. Jackson was no doubt looking down on his friend’s service as she laid in a closed casket draped with gardenias, violets and lilies of the valley while Rabbi Jerry Cutler led the service. Perhaps they were watching together.

Elizabeth Taylor and Michael Jackson aren’t the only two famous faces resting at the Forest Lawn Memorial Parks & Mortuaries. According to Radar Online, Clark Gable and Jean Harlow were also laid to rest there.