The R-rated version of The King’s Speech is being yanked from theaters to make room for the PG-13 version’s April 1 debut.

The King’s Speech is going to sound a bit different come April 1. The Weinstein Company is replacing the R-rated version with a PG-13 version that will hit 1,000 screens. The Oscar-winning movie that gave Colin Firth an Academy Award for Best Actor was originally given the higher rating due to language, which the new version will omit. In essence, the “F” bombs will no longer exist. 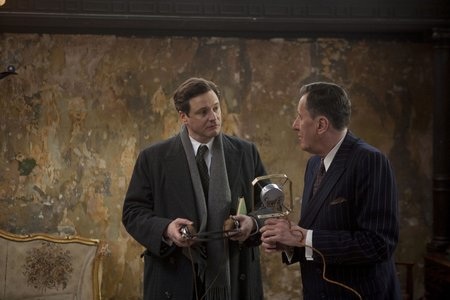 The Weinstein Company’s decision to release the new PG-13 version was strictly to widen their audience in hopes of picking up the revenue the R-rated version left behind. Normally there would be a 90-day waiting period between the time of the pull and the new release, but with new waivers in place that didn’t exist in the past, the process was expedited. The King’s Speech will mark the first time the waiver has been used.

“We are thankful to the MPAA for their wisdom and swift action in approving the release of The King’s Speech PG-13 version,” Eric Lomis, president of the Weinstein Company’s theatrical distribution and home entertainment department, said.

The King’s Speech is not only an Oscar-winning movie, it’s box-office gold. The film grossed $132.7 million in the U.S. and $226 million overseas, making it one of the most successful independent films of all time.

Will you be taking in the PG-13 version of The King’s Speech to see Colin Firth at his Oscar best or do you prefer the movie with a few scandalous words? Seeing Colin Firth again makes the trip to the theater all the more enjoyable!